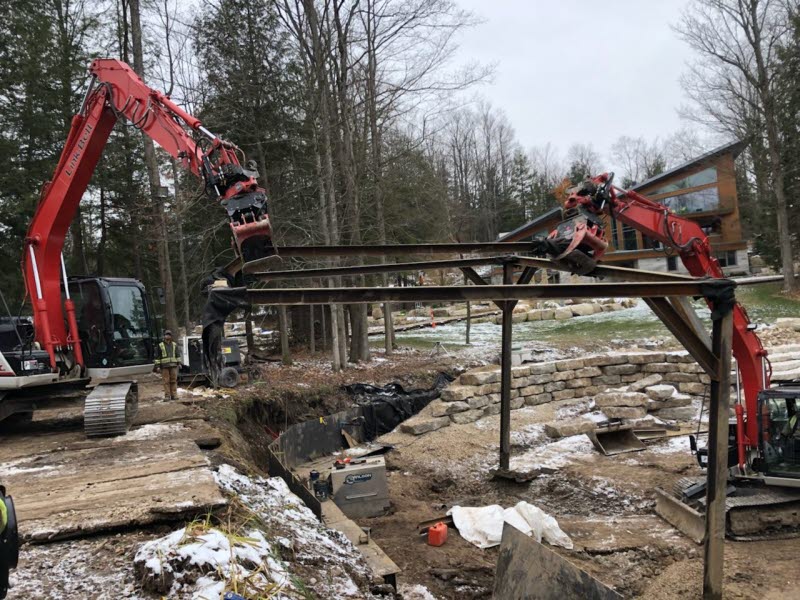 Equipping an excavator with a Rototilt tiltrotator has allowed the Ontario-based Wilson Ponds to dive into new opportunities.

The pond construction business took a dramatic turn when Wilson Ponds starting using an excavator equipped with a Rototilt tiltrotator.

After taking over the business in 1998 from his father, Ric Wilson was on his way to a big job in Milton, Ontario when his Kubota dealer, Stewart Equipment, suggested he try an excavator equipped with a Rototilt tiltrotator.

“I said I’d try it, but I have to admit, I looked at it and wondered why I needed all that stuff hanging off the boom. What’s wrong with the old way with a bucket?” Wilson said.

“It took a bit to get used to because you’re used to the old way, but then it was, ‘Oh wow, this is starting to work out well.’ By the end of the job, I thought ‘oh my god, whoever invented this was a genius’. This is amazing.”

That first Milton job had a great deal of ditching work in spots that were difficult for Wilson’s dozers to reach.

A Kubota 080, equipped with a Rototilt RT30 and Rototilt Universal ditching bucket, took over the job, and since Wilson’s Ponds could use an excavator to shape the ditch while they were digging it, the company saved a lot of time.

“My dozer is parked 90 per cent of the time now. We hardly ever use it,” Wilson said, adding the excavator and tiltrotator lets them work from any angle, reducing wear and tear on the undercarriage by as much as 60 per cent, as they’re not walking back and forth to get in the right position. 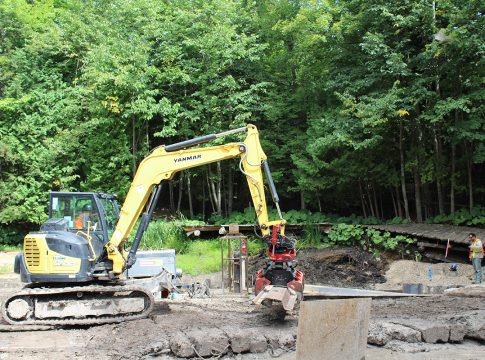 That trial run with his first excavator equipped with a Rototilt tiltrotator changed how Wilson Ponds operates.

“Years ago, we used a dragline and a dozer to dig out a pond, now it’s totally different. We’re building structures inside the ponds. We can’t do it without the Rototilts,” Wilson said.

“It took the business to a new level. It opened us to doing more, like armour stone and adding landscaping to our ponds.”

Today, the company fleet includes seven excavators equipped with tiltrotators from Rototilt, including a Kubota 055 with a RT20B, a Kubota 080 with RT30, two Yanmar 100s with RT30s and three Link Belt 130s with R4s.  As well, a Link Belt 130 long reach is the latest addition to the fleet, equipped with an R3.

“We’re like kids playing in a sandbox. Our operators love all the new things we try every day with our Rototilt. It makes work fun,” Wilson said.

With a wide range of attachments, Wilson doesn’t have to float in different equipment for each job, he can do it all with one machine. On dams and causeways, the tiltrotator’s hydraulic coupler lets them move from a ditching bucket to a grapple or a packer attachment to save time on site.

“There is just so much versatility with a Rototilt tiltrotator, it’s crazy,” Wilson said.

As well, adding a Rototilt Sorting Grapple allows Wilson to feed a large wood chipper to create mulch on site, which is easily placed with the tilting and rotating bucket for a natural look.

“What we can take on now just goes on and on. It doesn’t really stop,” Wilson said.

Wilson recently designed a specialty plate for mounting his high-torque driver, which drives augers 15 metres down into the ponds. Being able to use the driver on a Rototilt-equipped excavator, means Wilson doesn’t have to float in two machines onto a site and have one sit still most of the time, or send in one machine, but spend hours manually switching from the tiltrotator to the auger.

“It’s all quick attach, so it’s easy to switch back and forth to the driver. It saves us four or five hours a day,” he said.

Wilson Ponds was founded in 1964 and is based in Hillsborough, Ontario. Since Ric Wilson bought the company from his father, Wilson Ponds has branched out into new, specialized applications that transform a property; from custom ponds with rock features and waterfalls to trails, stone walkways and retaining walls.

“We’re not just doing ponds anymore. If the clients want patios or walls and more ditching and shaping on the properties, we can do it,” Wilson said. “With Rototilt we can shape closer to the house than we could with a dozer and do more contours.”

Rototilt has allowed Wilson to up his creativity. For one client, they added a grotto-style cave to their swimming pool, and for others, they’ve created waterfalls and natural-looking backyard oases.

Since every job is different, Wilson explained it’s difficult to quantify the difference of using a tiltrotator.

“The jobs we are taking on are so new. It’s creating jobs for us every day,” he said. “Cost-wise, Rototilt saves us money and time, and it makes the jobs that much faster and easier.”

The tiltrotator system lets Wilson Ponds shape while they’re digging so they’re keeping it natural and don’t have to haul away as much excess material.

“About 90 per cent of our clients want everything natural and so, as we are digging, we shape the pond and the land beside it,” he said. “We can come in real close to the drip line of the trees and do some contouring, so everything ties into the lawn and the edge of the pond.”

The new tiltrotator R-series is equipped with an Innovative Control System (ICS), which lets Wilson’s operators improve upon precision.

The operator can use the grapple to grab a corner of the filter cloth and roll it out perfectly. As well, precision grading has eliminated raking, leaving a finished product ready for seeding.

“That just saved an extra machine,” Wilson said. “We don’t need a tractor going around with a bar to smooth it out, it’s already done.”

“You don’t have to have a guy around your machines all the time as much,” Wilson said. “So that really saves a lot of time and is safer.”

Wilson used to need more manual labour, but now operators are able to do the majority of the work.

They have one employee with the laser to verify grades, but he’s safely out of the way when it comes time to place armour stone, which can be tougher to work with when there are people around.

The fleet equipped with the Rototilt tiltrotator system has also impressed Wilson’s clients. On a recent job, Wilson’s client ended up buying his Kubota 55 because he loved it so much.

“Every day he sat there watching us work and shaking his head saying, ‘I can’t believe you can do all that with one bucket and no one helping you’,” Wilson said.

The sale means Wilson gets to update his fleet again and he plans to buy a new Rototilt R3 to go with it.

Find out more at Equipment Journal